The O’Brien County Stock Show & Agricultural Association was formed in 1924. During the years from 1924 to 1951, the O’Brien Co. Fair was moved from city to city within the county. In 1951, the City of Primghar agreed to purchase land on the east side of town and three livestock buildings were constructed at the cost of $6,900, with the cost held down due to much of the labor done by volunteer businessmen from Primghar. A total of 8 buildings were built by the year 1960.

In the late 1980s, the construction of additional buildings began, including a new office/administration building, swine and rabbit building, horse barn, as well as an open class/horticulture building. The fair board members have continued to update the buildings over the years, placing tin on the roof, remodeling of the scale house, and replacing the larger doors with roll-up “garage” doors. The “master gardeners” head up the landscaping projects.

Some attractions in the early years of the fair were a tractor rodeo, a tractor pull in 1960, an our first demolition derby was in 1969. In 1972, the first Figure 8 races were held at the fairgrounds, with the Primghar JCs beginning to operate the races in 1974. Today, the Figure 8 races are still a popular family summer attraction, with races every other Saturday night and 2 races during the fair. These races during the fair are traditionally the best attended races of the summer, with the many fairgoers, exhibitors and their families attending.

Over the years, the fair board has sought out other evening entertainment, finding success with an “Ag Olympics,” the kids participating in the “Pedal Pull,” a local female group “Pure Emotion,” “Pumptown,” and an a cappella group “Home Free.”

The O’Brien County Fair is an “ag-based” fair, sponsoring the county’s youth in their 4-H and FFA livestock exhibits, as well as non-livestock projects, entertainment with “Share the Fun” acts, and educational demonstrations. Today, there are about 150 4-H/FFA members exhibiting 950 livestock projects and 600 non-livestock projects. The open class crafts are also growing in popularity.
The O’Brien County board members are proud to provide this “free” fair to the community and county residents with the support of the O’Brien County supervisors and the State of Iowa, continuing to promote the talents of our youth and instilling the value of their family’s farm business and the local agriculture. 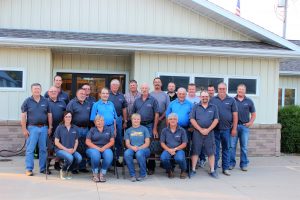