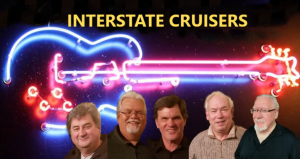 The O'Brien County Fair is excited to announce that Tuesday night's entertainment will be the Interstates Cruisers Band!
The band's roots started in the early 80's when Harold Vander Sloot contacted Michael Anderson asking him if he wanted to start a "country band". The other initial band members of Charles “Chuck” Post and Phil Sweeney made up the new group. A band name, Blue Ribbon Express was chosen. The band played the Iowa/Minnesota/South Dakota area for a few years. Chuck left the band a few years later and we were without a drummer. The band  brought-on Dave Steuck of Sanborn, Iowa.  As time went on the name of band started changing – "Blue Ribbon Express" to "Interstate Band" to "Interstate Cruisers" and ended up as just the "Cruisers" as a result of the music format went from "country" to 50's, 60's & 70's. Harold later left the band just after Paul & Shorty Veen joined, which was when the band name changed to the "Interstate Band". After a few years Sweeney left the band and was followed by Anderson. Steuck later left the band but after a year or so returned as the drummer. Paul & Shortie continued on with the "Cruisers" name and eventually they disbanded after starting another new band with a different name.  In September of 2015 the "Interstate Cruisers" were inducted into the Iowa Rock N Roll Hall of Fame with current members Michael Anderson, Phil Sweeney, Dave Steuck, and former members Harold Vander Sloot, Charles "Chuck" Post (posthumously), Paul Veen, Shortie Veen, & Dave Hill. I

n 2017 and each year since the "Interstate Cruisers" have been invited to play at the Iowa Rock N Roll Music Association's "Rock The Roof" series that occurs on Thursday nights from mid June to mid August along with other "Hall of Fame" bands and single acts. The "Interstate Cruisers" members added Steve Samuelson Sr. as lead guitar replacing Harold Vander Sloot who retired in 2018. Samuelson is also a Hall of Fame member after being inducted in September 2019 as a single performer. Samuelson Sr. has played with other bands such as Justin Davis, Flat Cat & 7 Sons. The band currently performs for NW Iowa audiences. In November of 2020 Jon Johnson was added with his great keyboard abilities.